Podiatry services are a medical appointment and therefore exempt from closure during the lockdown.

Please be rest assured that we are operating as usual, following all of the COVID-safe regulations to ensure your appointments go ahead safely. All of our staff have the correct PPE, and anyone entering the building will be screened, and their temperature checked.

Even shielding patients are able to access our services safely. Please make sure our reception staff are aware of your shielding status so that we can meet your needs correctly.

Please ensure that you follow the COVID guidelines when you attend - use the hand sanitiser provided (or wash your hands) and comply with the one metre plus rule.

We look forward to seeing you at your appointment.

A Little About Me

Rodrigo graduated in Adult and Paediatric Nursing in 2011 at the University of Malaga. After completing placements in a Podiatric Clinic and experiencing first-hand injuries that required Podiatric treatment, Rodrigo decided to study Podiatric Medicine at the University of Malaga and graduated in 2015. During his time as a Podiatry Student, he also worked as a Nurse in A&E and Elderly Care.

In 2015, Rodrigo moved to the UK, where he worked in different specialties as a nurse at Northampton General Hospital (such as emergency, paediatrics, elderly care and oncology) while finishing his degree in Podiatry and getting his HCPC registration in the UK.

Rodrigo began working as a Private General Podiatrist at the Northampton Clinic. Soon after, he started working for the NHFT Trust, where he became a Specialist Podiatrist in high risk and diabetic foot.

In 2020, he joined the University of Northampton, where he now lectures Podiatry as his main job, teaching general Physiology, Pathology and Clinical studies. He has also worked for the Sports Medicine department at Leicester General Hospital as an MSK Podiatrist.

In his spare time, Rodrigo enjoys various hobbies and activities such as travelling, motorcycling, calisthenics, climbing, juggling, capoeira and photography. 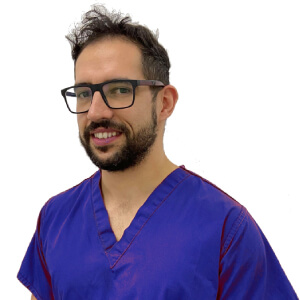